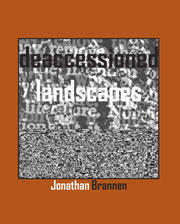 One day in college, I ran across a surprise in the reference section of the main library at Vanderbilt University in Nashville, Tennessee. In an unobtrusive glass case backed up against a shelving unit full of books, there rested a tiny exhibit of the visual poetry of Jonathan Brannen. Before that moment, I thought I was probably the only person on campus with any interest in visual poetry, but someone had found the work of Brannen interesting enough to set up a little display of it. At that time, Brannen was producing rich sculptural typewriter poems in which he would type layers of type over each other (sometimes twisted on their axes against the grain of each others’ text) to produce striking three-dimensional effects. Not until years later did I discover that Brannen himself had worked in that library at the time, and by the time I did Brannen was already a friend of my sister Kathy, who might have had no idea of his visual poetic skills. I’ve known and corresponded with Jonathan for many years, and he’s one of those few visual poets whose homes I have visited.


So when I approach the border of Brannen’s remarkable new book of poetry, Deaccessioned Landscapes, I bring with me some history. This history helps me understand the poetry a tiny bit better, just as my career helps me understand the book’s title. Deaccessioning is the formal process used by an archives (or even a library) to remove items from its collection. In an archives, deaccessioning is a sensitive issue, since the items in an archives tend to be unique and since deaccessioning is an absolute. Archives rarely deaccession, and when they do they usually carefully determine that the items do not fit their collection or were never valuable enough to have kept forever anyway.1 The title of Brannen’s book appears to refer to the way in which it uses language: pulling it out of context, moving whole landscapes of language out of the archives that is the earth and allowing them to exist apart and alone.


Real life artless and unmetaphored
be mine even if my voice comes from other
worlds like a bird broken by the wind.


Deaccessioned Landscapes consists of one hundred poems, which are divided into fifty numbered pairs. For instance, there are two poems numbered 1. To keep the paired poems en face, the text of the book has to begin unconventionally on a verso page. The first poem in each pair always has fourteen lines and almost always consists of a single stanza. The number of lines cannot be an accident; we must be expected to read these poems as some kind of neo-sonnets, even though these do not exhibit the structure of either Petrarchan or Shakesperean sonnets. The facing poems, strangely, also have fourteen lines, but they resemble sonnets even less. Rather than being simple blocks of text, these heavily visualized twins of the left-handed poems scatter bits of texts over each page and operate with, at best, a crooked sputtering syntax. The two facing poems, however, appear almost never to have any direct relationship to one another.
But the structure of the book is more complex than we might at first imagine. At some point a little past the middle of the book, I realized that the right-handed poems of atomized text are created out of left-handed poems from other parts of the book. For instance, left-handed poems numbered 1 through 12 provide the source text for right-handed poems 38 through 27.3 In most cases, Brannen picks a few words from each line of the source text then visualizes the chosen text. However, in a few cases, he adds new words to the extracted poem or mixes up the order the text in other ways. This entire enterprise of his exhibits a strong visual poetic imagination, one interested in shape and structure.


The contraction of small muscles.
The cinematography of sleep.


Each of the syntactical sonnet-like poems is a disjunctive sequence of sentences, and these sentences only occasionally and tenuously relate to one another. The poems themselves do not represent wholes, but fragments. These sonnets are guided by a mild surrealism that is mirrored on the recto page by poems that are gentle disbowelments of text. Brannen uses a number of techniques to keep these poems moving: anaphora; the occasional use of arcane “poetic” language (“O,” “doth”); the use of “unpoetic” scientific and technical terms (“diode,” “encapsulated,” “compound interest,” “wetware,” “denticulated”); the intrusion of references to popular culture; the constant process of putting unrelated words, phrases, and sentences adjacent to one another; and aphoristic turns of phrase (“Grey does not equal gray,” “Words generalize,” “Gaps between memories/are named history,” “To speak is an act of faith”). In the end, we are left with quiet elegant poems that pull in the reader with a Siren-like congeries of images and thoughts. The world here is both linguistic and visual, and it shimmers in and out of view like the world seen through a sunshower.

The best of the visualized poems take the chosen bits of source text and set them up on the page like toy soldiers in a frozen battle. We can read into and out of the visual structure of the text; it tells us something about the meaning and reading of the poem. In this poem below (12, recto), the structure of the poem replicates the subject of the poem, the lines ebb and flow, they form a space in which meaning occurs, they are cut and misplaced and displaced, and they finally drift away into sleep.

The poems in this little book are filled with beautiful and alluring phrasings, strange tricks of language that allow us to see things that cannot exist. In subtle ways, this is a book of didactic poems, since out of the Sargasso Sea of metaphors and unexpected pairings there float little thoughts about the world, and especially about language. For this is a book about language and the making of meaning, and Brannen rearranges his own words to make us see the invisible.


You can verbally rearrange situations
which in themselves would resist rearrangement
a sort of wetware tsunami recollapsing
the universe to zero as easily
as a cat in a necropolis
rearranges priorities.


These lines from one of the last poems in the book explain the process of the book. Jonathan Brannen amasses words into a poem, then he removes words from that poem until he is left with another poem—a secret mate that he slips into the book elsewhere. But this isn’t the only way he rearranges words. As I read through the book, I discovered that phrases in one sonnet frequently appeared in other sonnets. Brannen moved the phrases into new environments to give them new significance. These repeated phrases change kaleidoscopically; from a new point of view, after a flick of the wrist, they are some new beast in some new Eden. Finally, I can’t help but believe that many of the words in this book—if not all of them—are appropriated from other sources. Brannen has written at least one entire book of found poems, without ever noting the sources of his words . . . or the fact that the words had another source besides his imagination.


How I wish I could invent a brand
new color just for you to daze the night.


Brannen opens the book with an epigraph from Ludwig Wittgenstein, in which the philosopher of language wonders if our visual memory of an event is ever truly an accurate representation of the original. This epigraph focuses on both the language of memory and the process of seeing, just as Deaccessioned Landscapes provides us with language and image, with different views of the same meaning.


This isn’t everything but like everything
It seems so.


Jonathan Brannen’s Deaccessioned Landscapes is available from Chax Press for $16. It is a small square book with a vispoetic cover, and you can almost hide the whole of it between two hands.

1Coincidentally, my first job ever was in that same library. Just before my senior year in high school, my family returned to the United States, and I attended Father Ryan High School, literally two blocks from Vanderbilt’s campus. Coincidentally again, my job in the library was to reclassify books, marking some for deaccessioning. The year was 1978, and I reviewed books still classified using the Dewey Decimal system2 and used the Library of Congress classification system to reclassify any that had been charged out of the library at least twice during the 1970s.

2Since coincidences are inevitable, I might as well point out that the Dewey Decimal system was devised by Melvil Dewey, who headed up the New York State Library, a sister institution to the New York State Archives and one currently housed in the same building as mine. Before the formation of the State Archives, as a matter of fact, the State Library was the holder of the archival records of the State of New York.

3To understand the processes Brannen used, I searched for the source text for every right-handed poem in the book, and I discovered that he divided the book into four twelve-poem sections and one extra two-poem section. (This fairly closely mimics the structure of the French revolutionary calendar, which divided the year into twelve equal months of thirty days each, but then ended up (in a non-leap year) with five extra days—the fêtes—at the end of the year.) The orphan pair of poems, remarkably, do not seem to be related to one another at all. The message in this division of the poems is that perfect order is not possible, no matter how hard we try. Below is a full accounting of the structure of relationships between the poems in the book.


4These poems break the set patterns of the book.


Here where weather is the only landscape
I’m swearing off of ordinary letters.

Geof Huth is a longtime poet and blogger from New York State.
at March 28, 2012