This blog is associated with the web journal AlteredScale.com.

The journal's uniqueness, I hope, lies in the concept of mini-galleries. I organize webpages within the journal around a group of artworks that I see as implicitly working with some aspect of music—tone, harmony, disharmony, atonality, rhythm, and so on—in ways that can be fruitfully compared, both through similarity and dissonance and clatter. I should be clear: I am not looking for artwork that deals thematically with music. I am interested in the texture of music implicit in the works.

My doing this makes me no more a shaper of the journal than any other editor. I am simply being explicit about my decisions.

However, with Altered Scale 1 there was some concern that artists did not receive their own page. I am going to address that head-on: with the permission of the artist, the same work will appear both in a gallery and as a separate, isolated page. Perusers of the journal will be free to consider the work in both settings.

Submissions are closed for issue 2. If interested, send work in November for issue 3. See above and this page.

Being Simply Stupid by Jefferson Hansen

“There is no such thing as language”
— Mark Wallace

Feints and shivers against
a look in your eyes
that says something nasty
or not about a
game we may or may not
be playing.

Saying, “You’re sweating
against the cold &
this place is fun” meaning
whatever the hell she
didn’t know she
meant, I guess.

Thinking about language
is a diversion from
the action between your teeth.

And you can only write
when sleep dogs
your periphery &
you wish against
the spring-loaded
clicks of the keyboard:

but somehow, somewhere
you knew to pass the berries
for my sponge cake &
we smile as unknowing &
dumb as the toxins we carry

nothing else matters but your
lips, your lipstick, your shy
white teeth &, for now,
I hold out for being simply stupid
at June 09, 2012 No comments:

THE VOICE OF THE RIVER (FC2) by Malanie Rae Thon 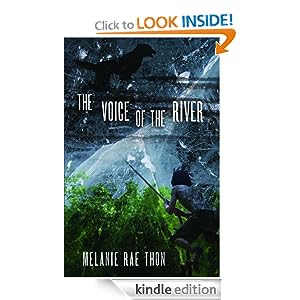 Two metaphors to help me understand this book:
>a hair braid, and
>the movements of a classical music composition.

A friend of mine, using straws pulled from a holder at a coffeehouse, taught me how a hair braid is constructed: you work take three strands and keep moving from the outside toward the middle, alternating sides. This disappointed me because I wanted there to be a central strand for my metaphor to work:

This novel seems to spin outward from a central storyline to incorporate a panoply of stories. I wanted there to be a central core to my metaphor. My friend and I considered alternatives: maypoles and tether ball sets, but they seemed, frankly, too phallic to me.

Then it hit me: this story is a braid. The strand that gets things started is originally at the center: Kai Dionne, age 17, his dog Talia, and his grandfather Theo go out for their early morning walk in a small town/rural area of a northwestern state, where "cold air from Canada moves down the Rockies." It is winter, and the dog gets ahead of the boy and the boy gets ahead of the grandfather, who holds a flashlight. Talia runs onto the ice on the river, falls through; Kai goes in after him and down. The grandfather can only see where the tracks stopped and run the stream of light from his flashlight uselessly over the barren ice and snow. The whole town comes out to search for the bodies.

And then we get the braiding: the searchers' stories are integrated into their very act of searching. The wild Tulanie Rey McKenna, age 17, who took every physical challenge imaginable with the vitality of a bronco that refused to be tamed, was paralyzed in a bicycle accident. He watches from an attic.

Oleta Esteban was driving her daughter Dorrie in a car when they became involved in an accident, and she can no longer walk a block without weeping in guilt and grief for her dead daughter: had she not spent five seconds awakening her father with a kiss...

The now dead Dorrie Esteban with scars on her hips from an operation to give marrow to her sick brother Elia.

"The river roars under ice, churns dark in the hole Kai opened" (31).

Daniel Sidoti who went over the edge of a ridge after swerving to miss a deer and spent a night almost freezing in his truck. Car after car passed: an old man barely able to walk pulled him to safety as the truck exploded. In the newspaper the next day: a picture of the old man's ripped pants and, inside, a colostomy bag.

Iris Jenae McKenna, age 5, went missing, crawled in a culvert and under a porch and finally slept with the comfort afforded by a dog, but was eventually located because of a kindly old man with his own story: missing his wife, dead since November.

Arlo Dean, caught in a web of confusion and sadness and resentment, shot his own father.


Joseph Trujillo tried to kill himself by diving straight down from a high bridge. His neck snapped, but he failed to die.

"Nine hours lost this boy in the river."

These stories wrap the original central story of Kai and Talia, commenting, adding, ornamenting, thickening. A town emerges, a mythology emerges, of stories intertwining and layering; of love and resentment and heartbreak coiling around themselves.

And always, what I most admire about Thon's writing, the ability to affirm life and love in the witnessing of the most abject pain.

(I wonder: Could a person who lived a charmed life ever practice real compassion?)

So that is the braid: the intertwining of the deadly love of Kai for Talia with story after story of wishing and wanting, desiring and demanding, caring in the face of no reason no care, and, mostly, vitality.

And now, for the metaphor of the musical composition:

Throughout the book is a counterpunctual play on human disaster. Some characters live through their accidents: Daniel Sidoti survived his horrific crash. Some get badly injured: the paralyzed Tulanie Rey. Some get scarred by medical intent: Dorrie Esteban. Some die: Dorrie and Kai.

A young girl was revived after hours in cold water.

This counterpoint seems to explore the randomness of nature's laws, that we do not live in a Newtonian universe of rigidity, but one that could go in very different directions given the same circumstances. Thon represents quantum reality at the emotional level. These are songs of not knowing but hoping, of living in possibility rather than certainty, of asking so much more of the universe than it can deliver, especially for these, the unprivileged rural people.

It is the quantum reality of consciousness: in many ways this is a Modernist novel along the lines of Faulkner and Woolf rather than, say, the constructions of a Pynchon. Thon uses music to tease out, not exactly construct, the patterns of thought and feeling, of consciousness; she unearths rather than builds. This is not a criticism; it is merely an observation.

"The voice of the river that has
emptied into the Ocean
Now laughs and sings just like
God."
—Hafiz

The Voice of the River page at FC2