Maurice Merleau-Ponty once said that we come to inhabit a novel. The buried metaphor here is, of course, architecture. As we move from the upper left corner of the first page to the lower right corner of the last page, we come to live in the form. Novelist Lance Olsen takes this metaphor for reading and writes with it. Theories of Forgetting has two back covers, upside down from one another. (See photo at the end of this paragraph.) A separate story begins behind each back cover, and is written on pages consistent with the upward orientation of that cover. This means that most pages contain blocks of writing that are upside down from one another. There are two "tops of the page," and the bottoms are the text that runs up (or down depending on orientation) to meet it. (See the second photo at the end of this paragraph.) 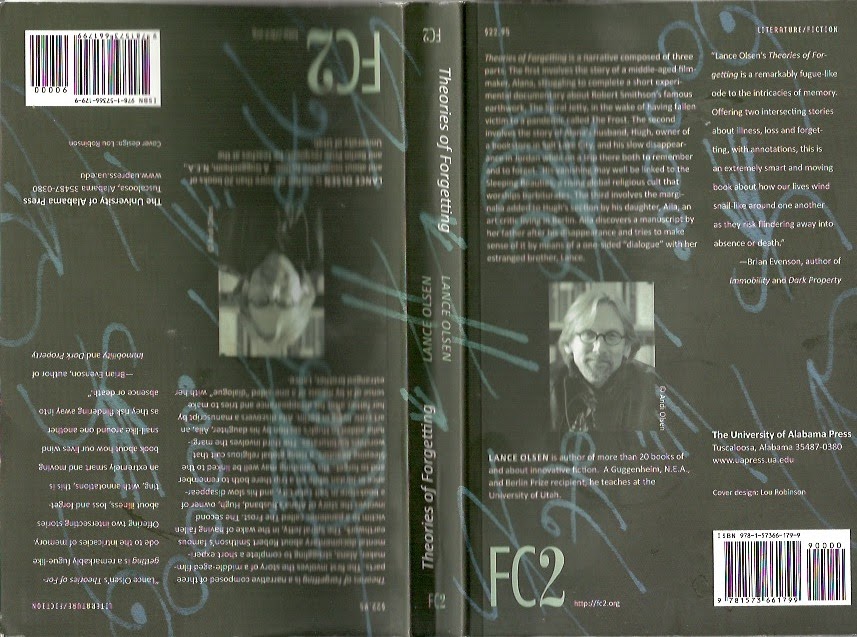 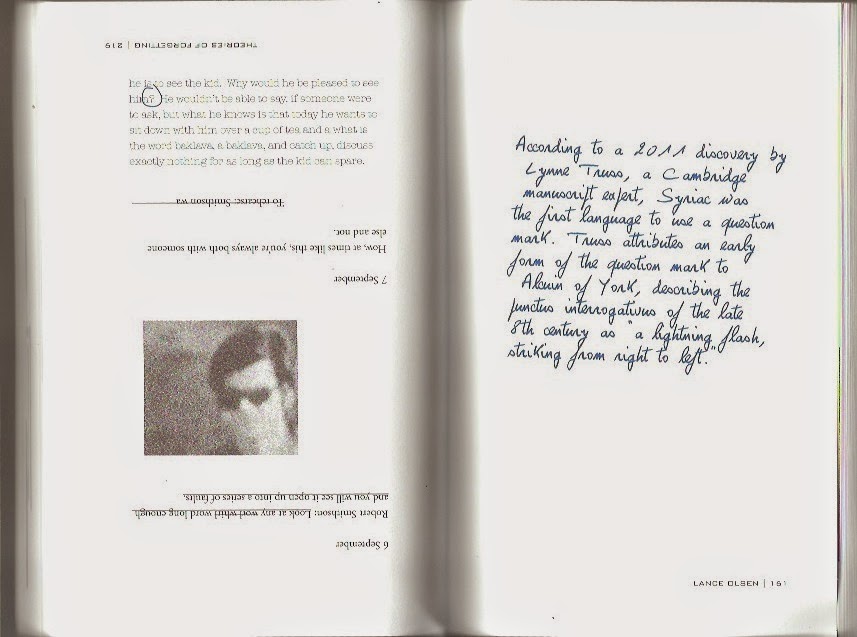 Forgetting is our most usual state. From an empirical perspective, we are bombarded with sense detail every moment. We cannot possibly attend to all of it; hence, we forget much, much more than we remember. From a perspective that emphasizes human consciousness, we perceive those sense details that our values, predispositions, and world view tend to orient us toward. In other words, we notice what we are looking for. Even here, forgetting is our most usual state. Most of our perceptions are quickly discarded. We remember the unusual, the important, the patterned. But we also misremember them, which is a form of forgetting. Do we remember anything in a pure form, untouched by time?

Architecture is obviously spatial, but it is also temporal. We cannot take in the whole building—front, back, inside, outside—at once. We perceive a building as the unfolding of our moving and removing around and in it. Motion is temporal. Unlike reading a conventional novel, this unfolding takes place according to choices made by the perceiver. She decides which door to enter first. Which room to move to. Where to luxuriate and take in a portion of the building. When to attend to people or things within it. Olsen gives us five doors into the habitation of his novel: the two back covers and three small, nondescript side doors. The side doors are 1) photographs, 2) news clippings, and 3) a commentary generally, but not exclusively, on one of the primary stories. It is handwritten in blue ink. In a book that invites various beginnings/endings, there is no reason why we couldn't start with one of the side doors. Each reader comes to inhabit this novel in a different temporal manner; his or her motion through it is more like the way we experience a work of architecture than a conventional novel. Each reader also chooses which door to exit through.

We misremember how someone looked at a certain age until we see a photograph. It jars us into what seems a memory, but is another type of mismemory. We cannot experience this photo as we experienced this person back when he or she looked this way. What's gone is gone forever, and can only be represented—and representation implies a difference and distance from the first presentation. Seeing the photograph jars us from one mismemory to another, but neither is accurate. Perhaps the way we remember the person looking reflects how we felt about him or her at that time. And how is a person represented by a photograph more real than one represented by recollected feelings?

One of the two primary stories is a journal of a woman working on a filmed documentary of Robert Smithson's Spiral Jetty, a visual art work that curls into Great Salt Lake in Utah. As the diary moves toward the second back cover, she becomes infected with The Frost, an epidemic disease that, for her, initially makes the fingers feel cold but eventually comes to cool down, and "freeze," the entire body. For her, it is fatal. She never finishes editing her documentary.

Even those closest to us we misremember—the source of both painful nostalgia and the possibility for growth. We could not move on if we could not forget. To remember in a pure form is to freeze.

The second primary story is a manuscript about a character always in motion. Possibly written by the widow of the woman who dies of the freeze, the character in this chapter is always on the move and quite alone. He travels through Berlin, but ends in the black sand of a desert in the Middle East. Unlike the woman, he dies of heat and exposure, of motion—not the inertness of freezing. Both heat and cold end in the same way: death. But this shouldn't surprise us. All ends in death. Perhaps Olsen is interested in the process of dying—or of living, since they are in some ways the same—rather than in death itself. He likes the journey.

The spiral jetty seems to be a stability amid ever-changing nature. But it must change: it must erode in the rain and the salt, in the whistle of the wind, in the hard heat of Utah. But it changes more slowly than that around it. Even though, as the lake depth has changed, it has sometimes been submerged, it projects relative stability and geometric perfection into the fluidity of nature. The Dia Foundation is responsible for the preservation of the jetty, and it keeps a photographic record of its changes over time.

One of the side doors into the book contains a series of fading photographs of the jetty, of the author—Lance Olsen himself—and his wife Andi, and of other people and things. The photos fade into time, both recording and misremembering the effacement of the jetty, the restorations.

We forget to remember. This means several ways. Time causes us to misremember rather than remember in any exact sense—we forget our very memories. We also forget in order to remember, since memory is a special case of forgetting, perhaps the most important way we forget. We also forget in order to remember in the sense of prioritizing what we most want to keep with us in the flux of any day. We must choose what is worth remembering.

The font of the story about the man, the tourist, is quite light and is even a little difficult to read. What's more, the man is obsessed with fonts, celebrating them in his narrative. He historicizes fonts, which are the material through which we record in words, in words that hover between memory and mismemory, that can bring back only in partial ways, just as this book can be inhabited in only partial ways, depending on the five choices for both entrance and exit.

If the jetty is thought of as background and nature as foreground, the jetty becomes the relative stability that highlights nature's dynamism. The changes around the jetty become the story. The jetty is simply the complement to and, in a strange way, the mirror reverse of nature even as it slowly erodes through nature's actions.

In the West, art aspires to the eternal, to remaining forever the same through time. This very aspiration simultaneously produces the need for art restorers and shows that their vocation relies on a lie, one that claims time and death can be overcome.

The Frost is an epidemic. We desire to freeze art into a specific time and place. This is what we call eternity. Freezing art into eternity is an epidemic sickness.

We exist neither in the freeze nor the heat, but in the middle, in processes both hot and cold, and lukewarm, and medium. We are always haunted by both the freeze and the heat.

The pictures of the news clippings show yellowing. Nothing stays news. Even the spiral jetty will yellow, just as the water around it has sometimes appeared reddish and other times yellowish. But the jetty stays news longer than newsprint. We nurture its yellowing into a form of what we consider eternity. We record its very changes "for all time." The news makes no such effort and no such claim— unless it is placed in a novel, and everything in a novel cannot help but tend toward the freeze, toward a dialogue with the "eternal." This is part of what it is to be a novel in the West.

Olsen's dedication: "for A, and all the days left." I assume "A" stands in for his wife, Andi.

The phrase "Theories of Forgetting" appears once in the novel, in blue handwriting, written by Aila, the daughter of the man who left the manuscript. In this marginalia she reflects on the movie the female narrator was making about Smithson's jetty: "So she theorizes decay, not merely as a process of emptying and exhaustion, but also one of relay & salvage" (99). Every time we come back to an artwork, to inhabit it anew, we remake it, and it remakes us. This remaking is both a salvaging and a letting go.