[The book can be purchased at Bookshop.] 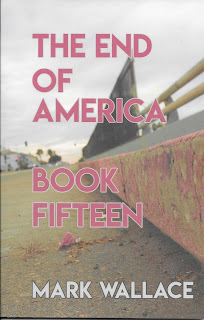 "The End of America Book Fifteen," the latest in a series by Mark Wallace, juxtaposes images from San Diego in 2015 and 2016 with more abstract observations in short prose lines. The effect is accumulative, and limited quotations cannot do justice to the bursts of awareness coming one after another. But I will do my best:

The benches under the pounding sun sit empty. There are no benches in the shade.

Abstract, it digs under the skin like a pebble in a shoe.

"Gravitate towards Jupiter": a sticker on the wall in the coffee shop bathroom (4)

In the first line of the above quotation, the words "burden" and "notice" are repeated. Somehow, there is a sense of requirement, a burden, associated with either noticing or not noticing. This implies an intense self-consciousness: what we notice is a choice. When we become aware of this choice, it can turn burdensome. Then we get the image of benches under the hot San Diego sun: There is no place to rest. The burden of noticing or refusing to notice goes on and on, not resting. Perhaps this burden is part of living, something we can never get away from.

Then Wallace moves to an uncomfortable metaphor for "abstract" —namely, "a pebble in a shoe." How exactly this fits with what comes before or after is not conceptually clear to me, but it feels right. Perhaps the abstractness is tied to sensing the burden of noticing; both seem terribly uncomfortable. But the voice of the poem keeps moving, ends up in the bathroom reading a sticker on the wall.

Discomfort comes and goes, insight comes and goes, perception comes and goes. At one point a large American flag is described fluttering on a crane above the city. Cranes mark progress. They usually also mark the destruction of areas of the city where new building is taking place. Somehow, that flag does not seem the equal of the particulars being narrated, nor does it seem the equal of the passing insights about experience and perception. It seems oversimplified. America asserts itself too much, even in San Diego, where perception and thought outdistance it by miles.

What I just wrote I believe, of course, is justified by the poem. But I'm not entirely sure. This poem sprawls, and reading it is more of an experience than a telling. Pulling back from it and accounting for it is difficult. It is so embedded in the trajectory of bursts of conscious awareness that discussing it is like scooping some water from a fast-moving stream and claiming to hold the stream in your hand. I'll keep trying:

The momentary sharp sensation of the needle jabs half an inch into the arm.

Two anonymous Internet identities argue and insult each other furiously over their commitment to events that are not taking place.

Comfort washes through the stomach at the barely audible sound of lawnmowers.

In these series of lines, Mark juxtaposes images from, I assume, an inoculation with social media driven delusion with the strange comfort created by hearing lawnmowers. As William James points out, the mind does not move in a stream. Rather, it leaps from perch to perch, like a bird. Mark is tracking attention, tracking what he notices, which, as we have already learned, is a burden when self-conscious.  Comfort comes from the strangest places. Nothing is predictable.

Consider for an instant that the hummingbird, emitting a nearly metallic high-pitched buzz, views this scene of flowering trees differently than the humans walking down the street.

Very little is clear about the relation between perceiver and perceived.

An array of opinions swirls around the issue of whether to remain in, or change, the situation.

A plastic coffee cup lid sits in the road. (22)

In the course of reading this book, some deep skepticism consistently pops up about the integrity of anything we call "self" and our ability to securely know what is going on in our lives and in San Diego and in America. Everything is in motion, including our self-conceptions. Perspectives proliferate, and we inhabit a different one each moment. This is unsettling, but also exhilarating: The world is complex beyond our imaginings, offering endless opportunities for exploration, in every moment, during every perception, which is always multiple and complex and partly chosen. And this insistence on the absolutely transitory nature of consciousness and experience is what sets this book apart from other poems that trace the way consciousness streams and perches and bursts.

Five pairs of white socks above five pairs of black sneakers move down the street in a row.

There is no way to stop anything from becoming something else.

The speaker in the poem describes looking at the ankles and socks of five people walking down the street, then realizes this will change, become something else, and no matter how badly we want to hold onto our perceptions and conceptions, of coffee cups and of our selves, they will morph and change, as will America, which will one day end.

See the poem It's Not Possible by Mark Wallace that appeared on this blog in 2012. Other posts associated with Mark can be located by using the search tool at the upper righthand corner.